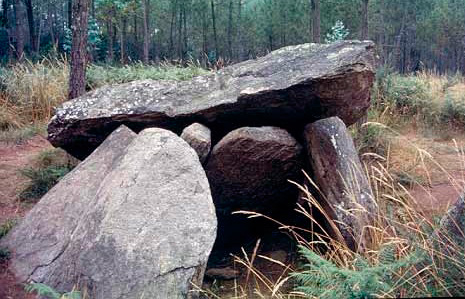 The dolmen of A Pedra da Arca (1), also known as the dolmen of Cerqueda, is one of the largest in Galicia. This dolmen, dating from the period between 3500 and 2700 BC, is located in the town of Malpica (Coast of Death ). According to tradition, a ‘moura’ built Pedra da Arca by loading the stones on her head while spinning and breastfeeding a child.

In Galician mythology the ‘mouras’ are beautiful and seductive women who live under the earth or under the waters, magical beings that occasionally walk among us, sitting on the banks of rivers and lakes combing their long hair with gold combs. They are usually linked to a castro (2), tumulus or prehistoric monument.

1 The Stone of the Ark

2 A castro is a fortified settlement, usually pre-Roman, some from late Bronze Age and Iron Age. Research associates them with the Celtic culture.

DID YOU KNOW? A cat was the only crew member of a ship that ran aground in Bergantiños

DID YOU KNOW? Fernando Blanco de Lema was the man that changed the history of the town of Cee